The History of the Modern Pharmaceutical Industry 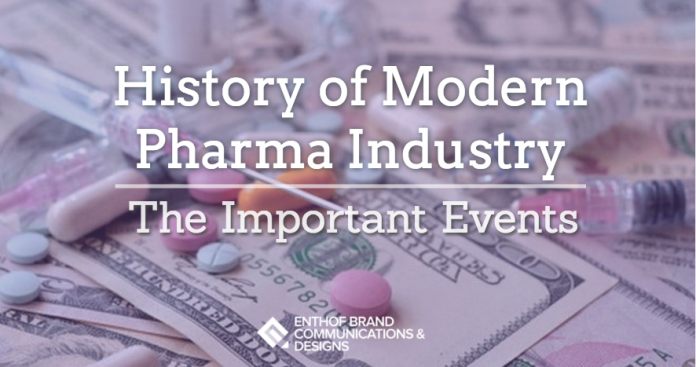 The roots of the modern pharmaceutical industry traces its origin to two sources:

Most medicines were sold without a prescription and nearly half were compounded locally by pharmacists. In many cases, physicians dispensed medicines directly to patients; companies often supplied physicians with their favourite formulations.

But the industry as we understand it today, has its origins in the second half of the 19th century. Whilst the scientific revolution of the 17th century had spread ideas of rationalism and experimentation, and the industrial revolution had transformed the production of goods in the late 18th century. The industry that married the two concepts for the benefit of human health was a comparatively late development.

Merck in Germany was possibly the earliest company to move in this direction. Merck started as a small apothecary shop in Darmstadt, Germany in 1668, but it was in 1827 that Heinrich Emanuel Merck began the transition towards an industrial and scientific concern, by manufacturing and selling alkaloids.

Meanwhile in the USA, Pfizer was founded in 1849 by two German immigrants, initially as a fine chemicals business. Their business expanded rapidly during the American civil war as demand for painkillers and antiseptics rocketed.

Whilst Pfizer was providing the medicines needed for the Union war effort, a young cavalry commander named Colonel Eli Lilly was serving in their army. A trained pharmaceutical chemist, Lilly was an archetype of the dynamic and multi-talented 19th century American industrialist, who after his military career, and trying his hand at farming, set up a pharmaceutical business in 1876. He was a pioneer of new methods in the industry, being one of the first to focus on R&D as well as manufacturing.

Bayer was founded in 1863 as a dye maker in Wuppertal. It later moved into medicines, commercialising acetylsalicylic acid as Aspirin around the turn of the 20th century, one of the most successful pharmaceuticals ever at that point.

1918 to 1939 (The Inter World-War Years) – Insulin, Penicillin and New Analgesics Are Introduced

The period was marked by two breakthroughs that presaged the arrival of the pharma industry as we know it today.

The war had also encouraged research into everything from new analgesics to drugs against typhus, with a great deal of collaboration between the companies and government.

The US pharmaceutical industry was booming, thanks to being part of the world’s biggest and most dynamic economy. Its growth was also helped by generous funding from government, with the National Institutes of Health seeing its federal funding rise to nearly $100 million by 1956. This investment fueled the development of drugs to come over the coming decades.

As the industry grew wealthy thanks to its growing portfolio of products, the potential ethical conflicts of making money from selling healthcare products became increasingly apparent.

George Merck addressed this question directly in 1950, proclaiming that: “We try never to forget that medicine is for the people. It is not for the profits. The profits follow, and if we have remembered that, they have never failed to appear. The better we remember it, the larger they have been.”

After World War II, the arrival of social healthcare systems such as the UK’s National Health Service (NHS) in Europe created a much more structured system, both for prescription of drugs and their reimbursement. In 1957, the NHS brought in what was essentially a price fixing scheme to allow reasonable return on investment for drug manufacturers, solidifying the incentive to invest in new medicines.

1960 – The Contraceptive Pill Is Introduced

Contraceptive pill had an impact on society almost as massive as that of penicillin, enabling women to effectively control their fertility and enabling sexual equality for the first time.

1961 – The Thalidomide Scandal Creates An Impact

The Thalidomide scandal of 1961 prompted an increase in the regulation and testing of drugs before licensing, with a new amendment to US Food and Drug Administration (FDA) rules demanding proof of efficacy and accurate disclosure of side-effects for new medications (the Kefauver Harris Amendment) being implemented in 1962.

Likewise, the 1964 Declaration of Helsinki put greater ethical strictures on clinical research, clearly cementing the difference between production of scientific prescription medicines and other chemicals.

Tagamet, an ulcer medication, became the first ever “blockbuster” drug, earning its manufacturers more than $1 billion a year and its creators the Nobel Prize. This marked a new departure as companies competed to be the developer of the next big blockbuster, and many achieved great success.

End Of The 20th Century – Beginning Of Grave Problems

Whilst there were some breakthroughs, the enormous expense and risks involved in R&D caused many to merely ape their competitors, trying to get a cut of market-share using “me too” formulations rather than innovating novel medications. For example, AstraZeneca’s popular proton pump inhibitor Nexium (esomeprazole), released in 2001, is merely a purified single isomeric version of an older drug which happened to be losing patent protection. Patents, or the lack of them, became a problem for the industry.

Some developing countries made policy decisions to ignore medical patents. The industry’s focus increased on marketing to maintain market share, on sources to protect commercial interests, and on lawyers to enforce legal claims on intellectual property rights.

These activities have brought a greater suspicion of the industry in the public at large. It has lead to a wider anti-science feeling and more pessimistic outlook on the possibilities of technology in society, as seen in panics over issues such as genetically-modified crops and suspicion towards nuclear power.

But on the positive side, computing and biotechnology have allowed great leaps forward in both development and production of new drugs. Automation of the drug discovery process through high-throughput screening, and the computerisation of genomics have allowed breakthroughs at a much higher rate than previously.