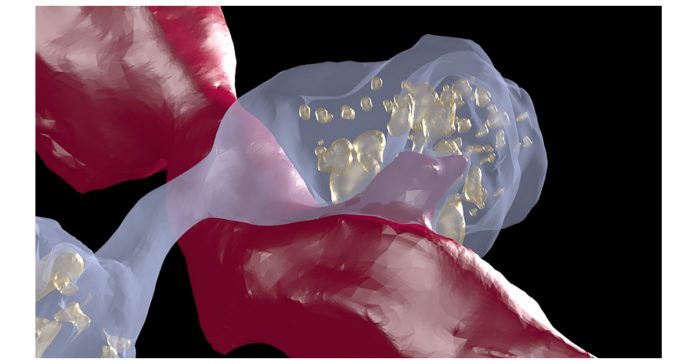 LEMONT, Ill.–(BUSINESS WIRE)–A 1980s commercial to combat drug addiction used a pair of frying eggs as a metaphor for the effects of drugs on your brain. While researchers understand connections between drug abuse and adverse changes in the brain, it is only now they can study in fine detail specific changes that occur in brains exposed to cocaine.

Researchers from the University of Chicago and the U.S. Department of Energy’s (DOE) Argonne National Laboratory detailed, for the first time, specific changes that occur in the brains of mice exposed to cocaine. The research provides new insights into the function of key dopamine neuron structures, which are involved in multiple functions, from voluntary movement to behavior.

A recent paper describes how they use connectomics, the development of detailed 3D maps of every neuron in the brain and their connections. The team set out to identify the process by which dopamine is transmitted across neurons, as they don’t make conventional physical connections, where signals are transferred across synapses.

The project also worked to understand dopamine’s involvement in addiction looking for possible anatomical changes in dopamine circuits that are caused by drugs of abuse.

That level of detail required Argonne’s large volume, three-dimensional serial electron microscope. It allowed for a closer look at dopamine neurons from both cocaine sensitized mice and control animals. The team collected approximately 2,000 sections from dopamine associated sections of the midbrain and forebrain. From these samples, they generated a collection of 2D, individual images — totaling over 1.5 terabytes of data. These were digitally reassembled using the supercomputers at the Argonne Leadership Computing Facility, a DOE Office of Science user facility.

The study yielded two major changes, both of which focus on axons, the ultrathin cables that project from neurons. Like trees, axons sprout tendrils that branch away toward other axons to deliver signals. After exposing the mice to cocaine, the team found both an increase in that branching, and the formation of huge swellings along the axon, where that branching retracted.

“Now we know that there is an anatomical basis to drugs of exposure,” noted Narayanan ​“Bobby” Kasthuri, a co-investigator on the project. ​“These animals received one or two shots of cocaine and already, after two to three days, we saw widespread anatomical changes. The circuit is rearranging much earlier and with much less exposure to the drug than anybody would have thought.”

The study presents important new questions related to repeated exposure and addiction, as well as treatment and recovery. Primarily, can the brain overcome the structural rearrangements introduced by addictive drugs, based upon its plasticity in other areas? Results from this research and accessibility to powerful tools of discovery hold the key to answering these types of questions in the future.