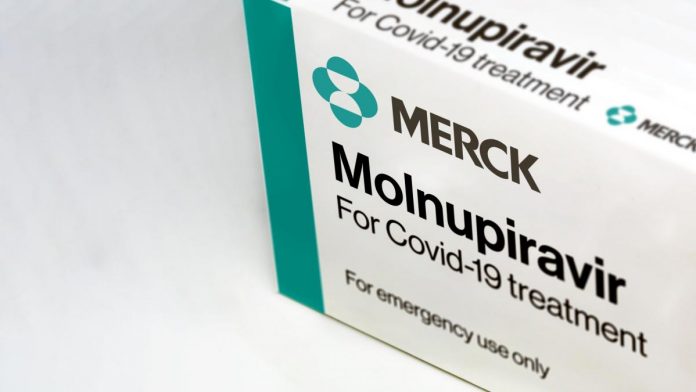 KENILWORTH, N.J. & MIAMI–(BUSINESS WIRE)–Merck (NYSE: MRK), known as MSD outside the United States and Canada, and Ridgeback Biotherapeutics today announced that the Japanese government will purchase, upon authorization or approval, approximately 1.6 million courses of molnupiravir (MK-4482, EIDD-2801), an investigational oral antiviral medicine. Merck is developing molnupiravir in collaboration with Ridgeback Biotherapeutics. Merck’s applications for the potential authorized use of molnupiravir are under review by Japan’s Pharmaceuticals and Medical Devices Agency, the U.S. Food and Drug Administration, and the European Medicines Agency. Molnupiravir is authorized in the United Kingdom for the treatment of mild-to-moderate COVID-19 in adults with a positive SARS-CoV-2 diagnostic test and who have at least one risk factor for developing severe illness.

“We are proud to partner with the Japanese government on this agreement to accelerate access to molnupiravir to patients in Japan if it is authorized or approved. We believe that these government purchase agreements reflect confidence in molnupiravir’s clinical profile and the hope that molnupiravir may have a meaningful impact on efforts to address the pandemic,” said Frank Clyburn, president of Human Health, Merck.

Under the agreement, if molnupiravir receives authorization or approval by Japan’s Pharmaceuticals and Medical Devices Agency, Merck will supply approximately 1.6 million courses of molnupiravir to the Japanese government for approximately $1.2 billion including applicable taxes. In anticipation of results from the Phase 3 MOVe-OUT clinical trial, and the potential for regulatory authorization or approval, Merck has been investing at risk to support development and scale-up production of molnupiravir and expects to produce 10 million courses of treatment by the end of 2021, with at least 20 million courses to be produced in 2022.

In addition to the Japan agreement, as part of its global efforts to accelerate access, Merck has also entered into supply and purchase agreements with the governments of several other countries and is currently in discussions with additional governments.

Merck is committed to providing timely access to molnupiravir globally through our comprehensive supply and access approach, which includes investing at risk to produce millions of courses of therapy; tiered pricing based on the ability of governments to finance health care; entering into supply agreements with governments; and granting voluntary licenses to generic manufacturers and to the Medicines Patent Pool to make generic molnupiravir available in low- and middle-income countries following local regulatory authorizations or approvals.

Supply: In anticipation of the results from MOVe-OUT and the potential for regulatory authorization or approval, Merck has been producing molnupiravir at risk and expects to produce 10 million courses of treatment by the end of 2021, with at least 20 million courses to be produced in 2022.

Supply agreements: Earlier this year, Merck entered into a procurement agreement with the U.S. Government under which the company will supply approximately 3.1 million courses of molnupiravir to the U.S. Government, upon Emergency Use Authorization (EUA) or approval from the U.S. FDA. Additionally, Merck has entered into supply and advance purchase agreements for molnupiravir with governments worldwide and is currently in discussions with additional governments. Merck plans to implement a tiered pricing approach based on World Bank country income criteria to reflect countries’ relative ability to finance their health response to the pandemic.

Voluntary licenses: As part of its commitment to widespread global access, Merck previously announced that it has entered into a licensing agreement with the Medicines Patent Pool to increase broad access for molnupiravir in low- and middle-income countries. Additionally, Merck previously announced that the company has entered into non-exclusive voluntary licensing agreements for molnupiravir with established Indian generic manufacturers to accelerate availability of molnupiravir in more than 100 low- and middle-income countries following approvals or emergency authorization by local regulatory agencies.

Molnupiravir (MK-4482, EIDD-2801) is an investigational, orally administered form of a potent ribonucleoside analog that inhibits the replication of SARS-CoV-2, the causative agent of COVID-19. If authorized or approved, the recommended dose for molnupiravir based on the Phase 3 MOVe-OUT clinical trial would be 800 mg twice daily for five days.

Molnupiravir was invented at Drug Innovations at Emory (DRIVE), LLC, a not-for-profit biotechnology company wholly owned by Emory University; Emory/DRIVE received some research funding from the U.S. Department of Defense and the National Institutes of Health. Molnupiravir is being developed by Merck & Co., Inc. in collaboration with Ridgeback Biotherapeutics. Ridgeback received an upfront payment from Merck and also is eligible to receive contingent payments dependent upon the achievement of certain developmental and regulatory approval milestones. Any profits from the collaboration will be split between the partners equally. Since licensed by Ridgeback, all funds used for the development of molnupiravir have been provided by Merck and by Wayne and Wendy Holman of Ridgeback.

Molnupiravir is also being evaluated for post-exposure prophylaxis in MOVe-AHEAD, a global, multicenter, randomized, double-blind, placebo-controlled Phase 3 study, which is evaluating the efficacy and safety of molnupiravir in preventing the spread of COVID-19 within households. For more information, please visit http://merckcovidresearch.com. Please visit the Merck media library for molnupiravir images and b-roll.

For over 130 years, Merck, known as MSD outside the United States and Canada, has been inventing for life, bringing forward medicines and vaccines for many of the world’s most challenging diseases in pursuit of our mission to save and improve lives. We demonstrate our commitment to patients and population health by increasing access to health care through far-reaching policies, programs and partnerships. Today, Merck continues to be at the forefront of research to prevent and treat diseases that threaten people and animals – including cancer, infectious diseases such as HIV and Ebola, and emerging animal diseases – as we aspire to be the premier research-intensive biopharmaceutical company in the world. For more information, visit www.merck.com and connect with us on Twitter, Facebook, Instagram, YouTube and LinkedIn.

This news release of Merck & Co., Inc., Kenilworth, N.J., USA (the “company”) includes “forward-looking statements” within the meaning of the safe harbor provisions of the U.S. Private Securities Litigation Reform Act of 1995. These statements are based upon the current beliefs and expectations of the company’s management and are subject to significant risks and uncertainties. There can be no guarantees with respect to pipeline products that the products will receive the necessary regulatory approvals or that they will prove to be commercially successful. If underlying assumptions prove inaccurate or risks or uncertainties materialize, actual results may differ materially from those set forth in the forward-looking statements.

Risks and uncertainties include but are not limited to, general industry conditions and competition; general economic factors, including interest rate and currency exchange rate fluctuations; the impact of the global outbreak of novel coronavirus disease (COVID-19); the impact of pharmaceutical industry regulation and health care legislation in the United States and internationally; global trends toward health care cost containment; technological advances, new products and patents attained by competitors; challenges inherent in new product development, including obtaining regulatory approval; the company’s ability to accurately predict future market conditions; manufacturing difficulties or delays; financial instability of international economies and sovereign risk; dependence on the effectiveness of the company’s patents and other protections for innovative products; and the exposure to litigation, including patent litigation, and/or regulatory actions.

The company undertakes no obligation to publicly update any forward-looking statement, whether as a result of new information, future events or otherwise. Additional factors that could cause results to differ materially from those described in the forward-looking statements can be found in the company’s 2020 Annual Report on Form 10-K and the company’s other filings with the Securities and Exchange Commission (SEC) available at the SEC’s Internet site (www.sec.gov).

Merck and Ridgeback Biotherapeutics Provide Update on Results from MOVe-OUT Study of Molnupiravir, an Investigational Oral Antiviral Medicine, in At Risk Adults With Mild-to-Moderate...

QIAGEN reaffirms effectiveness of its SARS-CoV-2 PCR tests in light of the new coronavirus variant B.1.1.529